Home / The blog / The most popular cars rented around the world.

The most popular cars rented around the world.

Just imagine how you realize the dream of driving, traveling along the autobahn in an old Jaguar or crossing a beautiful landscape in a Porsche SUV. But driving a car abroad and renting it is a completely different experience. Various road signs, traffic rules and even the need to drive on the other side of the road can create tension for any person.

Because of this, when it comes to making a decision, most people may be more inclined to go for something that will allow them to feel as comfortable as possible on foreign roads and save them some money. But if people don't rent a Rolls-Royce for a family vacation, then what brand of car can you rent in each country when going on vacation? DiscoverCars.com we found out which brand of cars tourists rent most often in almost every country in the world by analyzing rental data from 2014 to 2020. 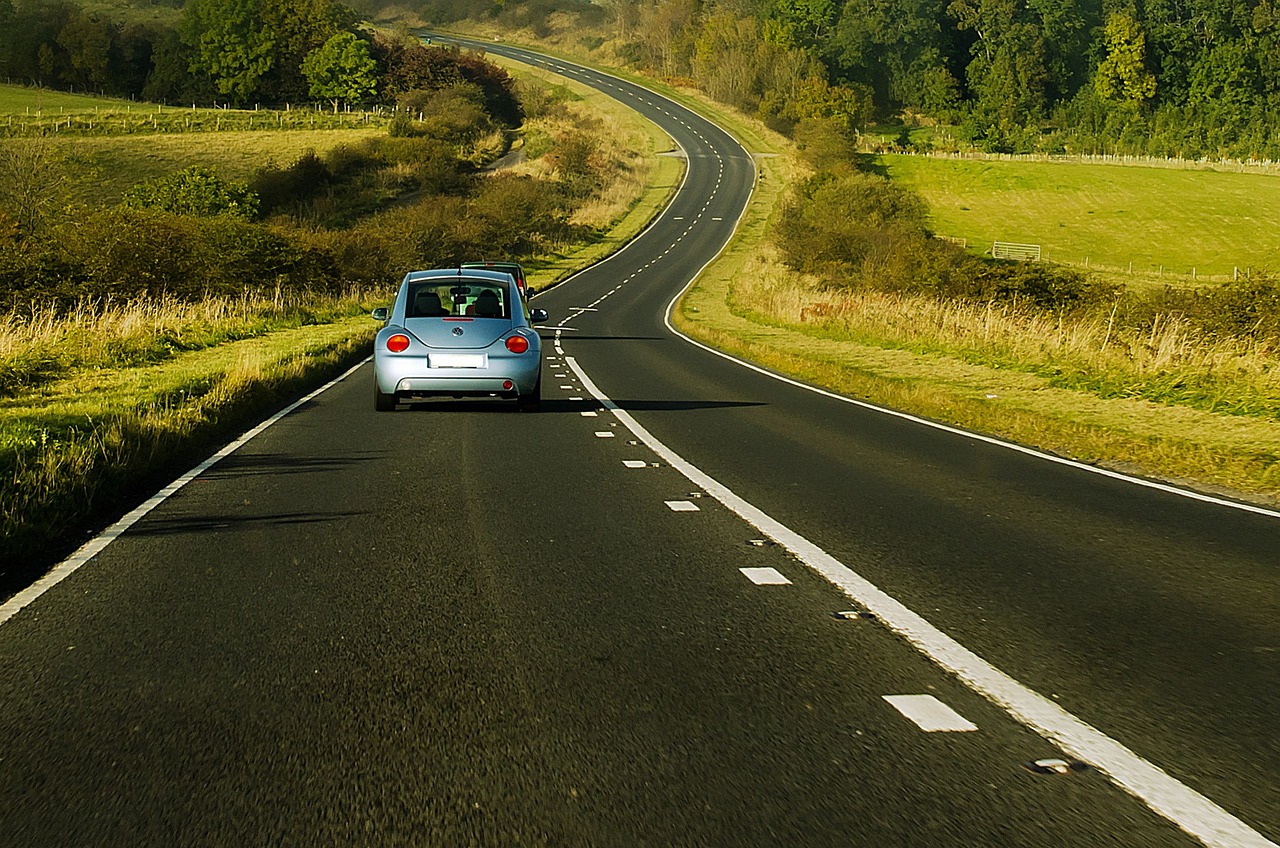 Volkswagen and Toyota are at the top of the leaderboard.

Surprisingly, two car brands share the top spot, with Volkwagen and Toyota being the top choice for 20 countries as their reliable vacation car.

people traveling to Lithuania are most likely to choose a German car, as 68% chose this brand as their holiday car, with the VW Polo being the most popular (25% of all rented cars).

Those who are vacationing in Norway are the second most likely to rent a Volkswagen car abroad, as 57% of people decided that VW would suit them best. The majority (28%) of these rented cars were VW Polo.

Latvian tourists are the third most likely to choose Volkswagen as a rented car abroad, as 51% chose a German manufacturer as their route. In addition, unlike visitors to other countries, the most popular model was the VW Golf, as 20% of people rented it.

People visiting Colorado in the US are more likely to want to take a ride in a Toyota, with 59% of rentals coming from the Japanese automaker.

Of these cars, the Toyota Yaris was the most popular, as it accounted for 21% of the cars rented by people visiting Colorado.

Those who are vacationing in Thailand take second place for lovers of all things Toyota. 52% of all cars rented in Thailand were Toyotas, 9% of all tenants chose Toyota Corolla, which makes it the most popular model.

The place whose tourists are the third most loyal to the Japanese brand is actually a state again. 45% of visitors to Georgia rent a Toyota, and the Toyota Corolla sedan makes up the majority of rented cars, as 30% of people chose this model. 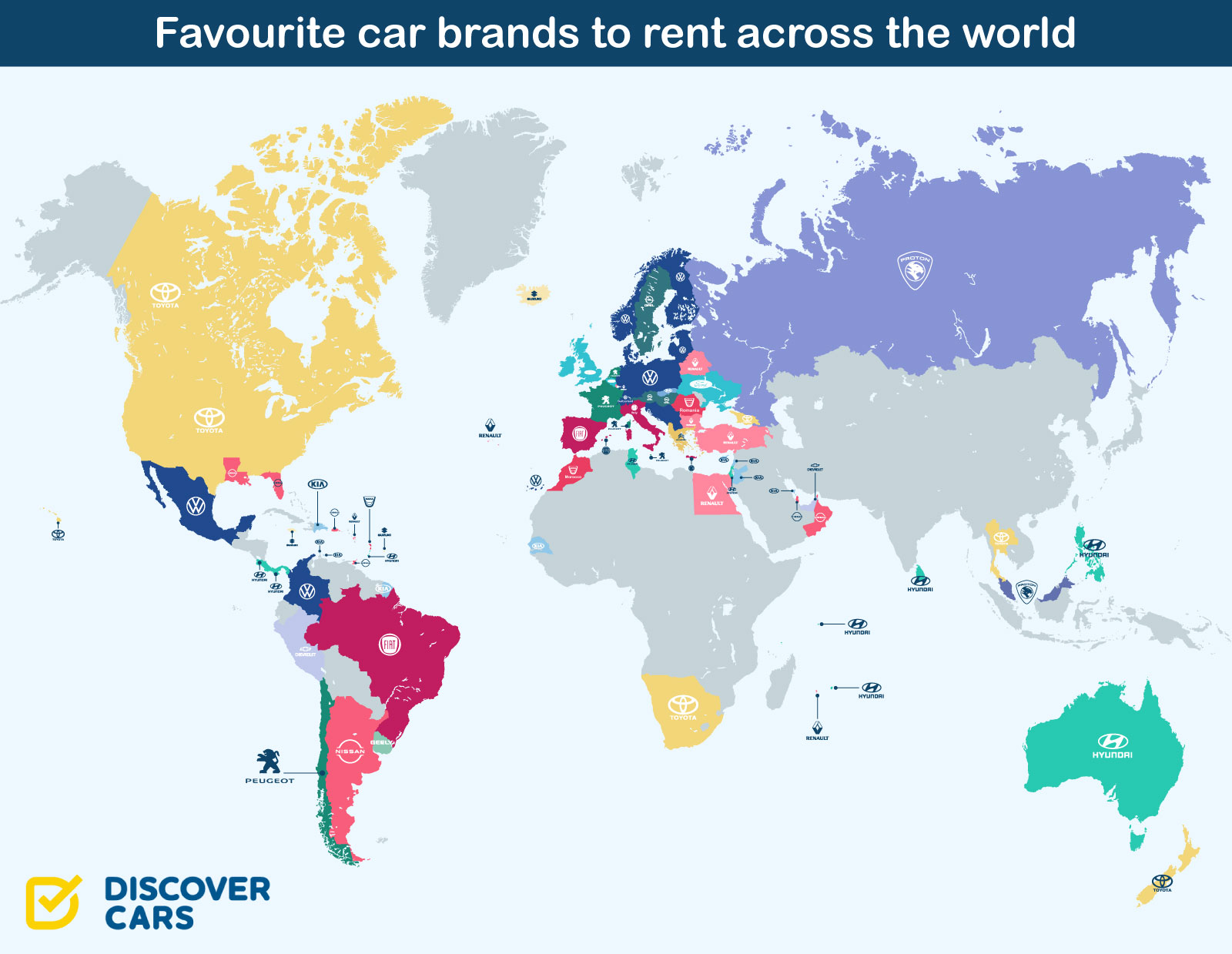 Second from the top are Kia and Hyundai.

Tourists visiting 10 countries out of 109 that we have reviewed are likely to choose a Kia car for rent. Hyundai is also tied for second place, as tourists most often visit 10 countries by renting a Hyundai.

Aruban tourists are most likely to choose a South Korean car brand, as 84% rented this car brand in the period from 2014 to 2020. The Kia Picanto was the most popular model, accounting for 69% of all rental cars.

The next country where people are most likely to rent a Kia when visiting is Bahrain. 83% of people decided that this particular brand suits them the most. 32% of these rented cars were Kia Picanto.

Curacao is the third country where tourists most often choose Kia as a rental car, as 74% of people. Also, as in other countries, 44% of people rented a Kia Picanto.

people traveling to the Seychelles seem to be the most loyal to the car brand: 74% of rental cars are Hyundai, and Hyundai i10 makes up 49% of these tenants.

Tourists vacationing in the Philippines take second place in the South Korean automobile fan club. Of all the cars rented in the Philippines, 65% were Hyundai, with the Hyundai Accent being the most popular (64%).

Panama is a country whose tourists are the third most likely to rent a Hyundai, as 55% chose the car brand as their vehicle for recreation; and just like in the Seychelles, Hyundai i10 made up the majority of rented cars.

Renault is in third place.

9 out of 109 countries have Renault as a car brand, which is most likely to be rented by international tourists.

Tourists in Belarus often choose French-made cars for their vacation rental, which makes it the most likely place out of these nine countries. 59% of the rented cars were Renault, and 56% were Renault Logan.

Egypt and Guadeloupe are the other two main countries where tourists prefer Renault. 49% of tourists traveling to both of these countries rent Renault cars.

39% of the rents rented in Egypt were Renault Logan, while Guadeloupe tourists loved Renault Twingo, accounting for a third of the rented cars.

There were some surprises in the statistics — but it is expected to see the iconic Ford brand as a favorite of people visiting America.

It is quite possible that such analytics will encourage travelers to make their choice more confidently when renting a car.  What would be your number one choice when you go abroad?